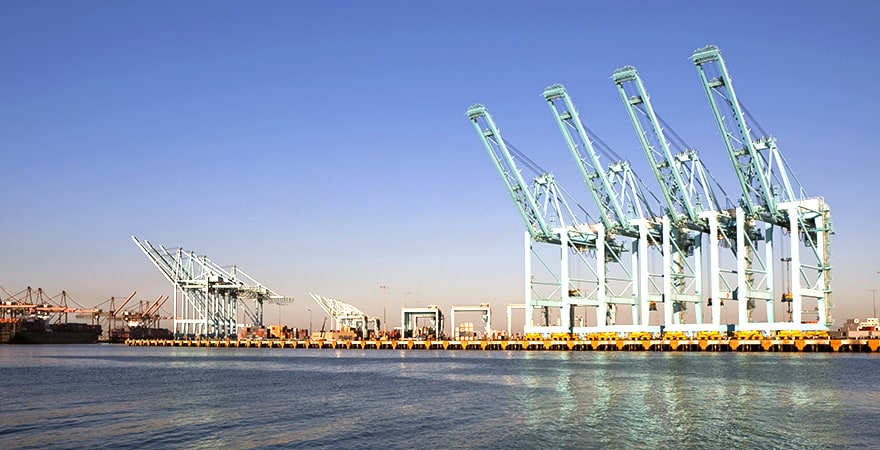 Recognized internationally for pioneering the development and use of Alternative Maritime Power®(AMP®) for container ships, the Port of Los Angeles and Battleship IOWA today unveiled a new permanent educational exhibit on the historic Battleship IOWA wharf. Battleship IOWA has become the latest vessel to plug into clean, electric shore-side power at the Port. The ship’s operational systems previously ran on a diesel generator.

Ships are the heaviest pollution contributors in seaborne trade, accounting for about half of all port-related pollution in San Pedro Bay. Plugging a ship into AMP® for a 24-hour period achieves the same air quality improvements as taking 33,000 cars off the road.

“Today we celebrate yet another milestone in our ongoing efforts to assure the best possible air quality in and around the Port,” said Los Angeles City Councilman Joe Buscaino. “Environmental technology developments like Alternative Maritime Power® have helped contribute to the Port’s substantial reduction in ship emissions over the last decade and a half.”

“The Port of Los Angeles made history as the birthplace of electric shore-side power technology for container ships,” said Jonathan Williams, president and CEO of the Battleship IOWA museum. “So it’s fitting that a historical icon like the Battleship IOWA will house an exhibit where the public can learn about AMP®.”

AMP® technology allows vessels to shut down their diesel engines while at berth and plug into clean shore-side power to run on-board systems. In partnership with technology provider Cavotec, the Port first used AMP® in 2004. This was three years before the California Air Resources Board began requiring container, cruise and refrigerated cargo ships that routinely called at the state’s largest ports to use AMP® or an equivalent technology. International standards for shore-side power connections were put into place in 2012.

“The Port’s success with AMP® technology has only been possible with the support and cooperation of many, including Cavotec, our terminal operators, participating shipping lines and so many others in our Port community,” said Gene Seroka, executive director at the Port of Los Angeles. “We’re working with ports worldwide not only on AMP® technology, but also to continue exchanging data and testing other promising zero and near-zero technology that promotes more sustainable port operations and cargo movement.”

AMP® is now a standard environmental technology feature in most new ships, and more than 50 ports worldwide have AMP® infrastructure.

The new AMP® exhibit on the wharf steps from the entry ramp onto Battleship IOWA is a joint project of the Battleship IOWA, Cavotec and Port of Los Angeles. The exhibit, which includes heavy-duty AMP® cables and connectors, celebrates the technology’s success, its widespread adoption at ports worldwide over the past decade, and the many stakeholders who helped make AMP® a viable alternative for container and cruise ships calling at the Port.

The Port of Los Angeles is America’s premier port and has a strong commitment to developing innovatively strategic and sustainable operations that benefit Southern California’s economy and quality of life. North America’s leading seaport by container volume and cargo value, the Port of Los Angeles facilitated $270 billion in trade during 2015. Port operations and commerce facilitate more than 133,000 jobs (about one in 14) in the City of Los Angeles and 479,000 jobs (or one in 18) in the five-county Southern California region. The San Pedro Bay Ports support nearly 1 million California jobs and 2.8 million nationwide.

CFR has weekly service out of the port of Los Angeles to destinations around the world. With offices across the United States, we offer worldwide shipping solutions for every budget and schedule.

The 1970s produced some of the most iconic rides before government regulations were implemented, and…

Have a dream car? Read this.

Ever think about finally buying that classic car you love from back in the day,…